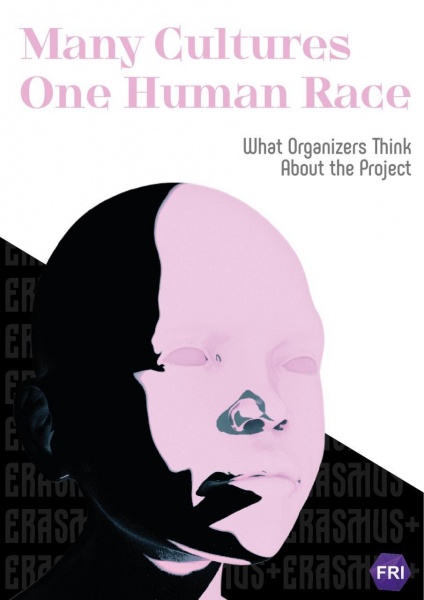 On February 25 — March 4, the FRI members held a Youth Exchange “Many Cultures — One Human Race”. Young people from six countries have joined the project under the Erasmus+ program: there were members from Armenia, Italy, Jordan, France, Poland, and Ukraine. We decided to show the work of the team on the project from the inside, so we conducted short interviews with the organizers Olha Dobrova, Ruslan Gaiduk, and Anastasiya Kravets.

There are a lot of impressions of the project both from the organizers and participants. When you hear about Erasmus+, it seems so cool and a little bit unreachable, but the FRI members have got a chance to write their project from scratch and to organize something truly incredible.

For Olha Dobrova this project became the first one where she proved herself as a coordinator of the Erasmus+ project. “I have never imagined that there would be such an atmosphere at the project. I am very pleased to have implemented it, as we brought 25 foreigners to the Carpathians, showed them our culture, and built the community”.

Participants were selected by encrypted questionnaires, which were viewed by a commission of five to eight people. Similar procedures were performed by organizations in other countries. Those people interested in the topic of international exchange and migration, as well as those who have not yet had considerable experience in exchanges, were selected to express themselves.

Olha recalls that the program was registered by May, and in August the project was approved. To sum up, all preparation took about a year. From that time a serious organization and the distribution of the budget began. It was necessary to think through everything to the smallest detail: how to bring participants to the venue, what food and stationery to buy, where to settle the people, and much more. The project was conducted in Verkhovyna in the Ivano-Frankivsk region.

At the project “Many cultures — One Human Race” were organized teambuilding exercises, discussed intercultural stereotypes and migration, organizers encouraged people of different ethnic backgrounds for communication.

“The biggest challenge was to stay yourself and the coordinator at the same time when you have a lot of tasks and duties and you need to work in a team. — shares Olha. — I was able to endure being a coordinator and I enjoyed the moment. I experienced facilitating and understood that after the organization of such a big project at the age of 21 I can do everything!”

Olha described the project with these words: diversity, tolerance, friendship.

She also made a short checklist of what other FRI-organizers should pay attention to:
– plan everything in advance
– practice the crisis management
– improve English before the project starts
– be ready that something can go wrong, because some foreigner may have troubles in getting VISA to Ukraine. Thus, the Security Service of Ukraine called the head of FRI with questions about why a girl from Jordan was coming to us.
But the most important — enjoy the results!

Ruslan Haiduk comments on this project:

“A lot of interesting people gathered at the youth exchange, with and without experience in the project, so we were able to create a rich knowledge-sharing environment”.

Preparation was intensive: a few months before the start, the team of the organizers held regular online meetings discussing the program, logistics, creating info packs for participants. They also constantly communicated with the partners and future participants. In this way, the FRI members were able to carry out the project at an excellent level.

As it was a youth exchange, during the project there were the sessions facilitated by the participants of the FRI. The aim was to create an ideal environment for sharing experiences and generating ideas on migration and intercultural dialogue.

Of all the events, the most memorable for Ruslan were informal evenings, as everyone gathered around the campfire, shared their stories and traditions, and played different games (mafia, truth or action, etc.).

Ruslan described this project in one word “brightness”. He noted that the event improved his facilitation skills and gave many life lessons.

Anastasia Kravets, another co-organizer of the project, describes her experience:

“I remembered Zoom meetings that were held every Monday. Yes, they appeared before the trend. They usually started around 8 p.m. and ended after 11 p.m.”

If it was necessary to describe the project in one word, Nastya would choose the word “Verkhovyna”. Now this place is associated only with the project: people, training, experience, and emotions.

The FRI member shares that she has gained valuable experience in facilitating pieces of training in English, communicating with hostel staff (felt like a small bridge between the participants and staff), in conducting reflections with young people. She also tried to combine her basic work with the project but realized that morally it was not easy. She emphasized that the organizers should understand that when they do such projects, they fall out of their lives for a whole week. You dedicate yourself to organizational moments and communication with the participants from 8 a.m. to 10 p.m., you spend energy on others, and there is only the night to recover, not to work. If you choose to be a public figure for this period, it is better not to get distracted, but to follow the one thing and perform it at the highest level.

The participants from Ukraine and from abroad decided to share their impressions.

Tanya Bass, Ukraine: “First of all, I want to say that the project had a tremendous impact on me as a person. A lot of stereotypes in my head have been destroyed, many new views have opened up, my outlook has expanded. Concerning the participants: they all are wonderful! In those few days, we turned from strangers to family. We had very cool lectures and cozy evenings with the fireplace till the morning. The atmosphere of the project was unsurpassed 😍 I want more”.

Coralie Bottin, France: I expected to meet new people from various backgrounds and countries, to learn more about them. But especially to learn more about migrant conditions and to be able to make my own opinion (without depending on the media anymore).

I had a very good experience because we were able to discuss serious matters in a good atmosphere without judgment. This is a serious topic which is not always easy to talk about. This was a good opportunity to do so!

I had the opportunity to organize an activity, which I based on theatrical improvisation. Each member had a role to play, or a “joker”, and could join the play at any moment. This was a very good time, especially when one of the participants decided to enter the play and act like a dog!

On the last day, the tutors decided to take some revenge for us being late during the sessions. So they just locked us inside a room! This was funny until it started to smell like burn… »

So, we hope this material inspires other FRI members to get involved in creating Erasmus+ projects and gaining invaluable experience in the international environment. Detailed advice on the organization can be found in the Erasmus + project registering and holding the guide, which is currently being prepared by the FRI International Department.