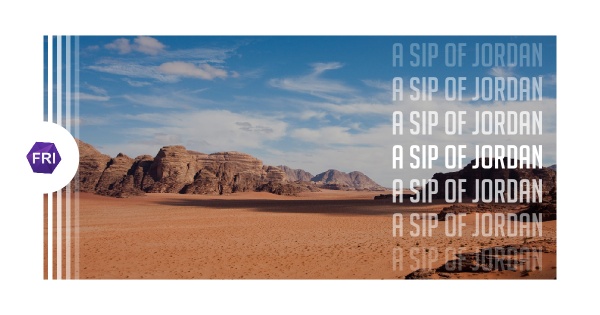 Quarantine is not a barrier to an intercultural exchange! FRI International Department arranged an online meeting “Kovtok Yordanii” (eng. “A Sip of Jordan”), to open Jordan culture for Ukrainians. Anas, a Jordanian who met FRI members on the Erasmus+ project “Many cultures — One human race” in Ukraine, shared his experience. In our material, we will describe the character of Jordanians, unique traditions of the nation, beliefs, and some interesting facts about the country.

Jordanians are generous and kind people, they are doing everything for the guests to feel like home. These qualities differ them from their neighbours. Jordan is not a dry country, as some people think. It is hot enough there, but they have all four seasons, including snowy winters.

Jordan is also rich in traditions. For example, for weddings they cook traditional food called mansaf, which consists of rice, meat, and yogurt. They usually make a lot of it — around 500 portions.

One of the widespread stereotypes about Jordanians is that they buy women for exchange for camels. Anas declined this. Also, some of us were thinking that Jordans have to refuse food three times before taking an invitation for supper. These aren’t true. By the way, in this country, women don’t have to cover their heads with hijab. Everyone has a right to choose, and everyone wears usual clothes.

In Jordan, there is one of the main World Miracles — Petra. It’s a famous archeological object located in the desert.

These days in the country there is Ramadan, so many believers are fasting. Muslims fast to understand how people who don’t have money or food feel. After a holy month, they celebrate Uraza-Bayram — holiday-analogue of our Christmas, which lasts a few days. Anas thinks that fasting is the most useful thing because it helps clean the body and improves the immune system, especially in pandemics. Jordanians fast from the morning to the sunset. They wake up at 3 a.m. to eat before the sunrise. They also pray five times a day, but it takes 4–5 minutes.

Talking about a pandemic, Jordan is one of the first countries that has almost fought the COVID-19. How did the government act? They were allowed to leave the house only from 8 to 18, and only one member of the family was allowed to leave. Every Friday and Saturday they had kind of a curfew when no one could leave the house. That’s how they managed to deal with the crisis. Sometimes they still have new cases of illness, but they usually happen close to the borders, for instance, with Saudi Arabia. Jordanians hope that quarantine will end at the same time with Ramadan.

The online-meeting experience showed us that getting out of the house is not always obligatory to delve into the other culture. We found out that Jordan is an amiable and open country with the people who are always ready to support and share their meal!

So break the stereotypes and push the boundaries by joining our next “Sips”!