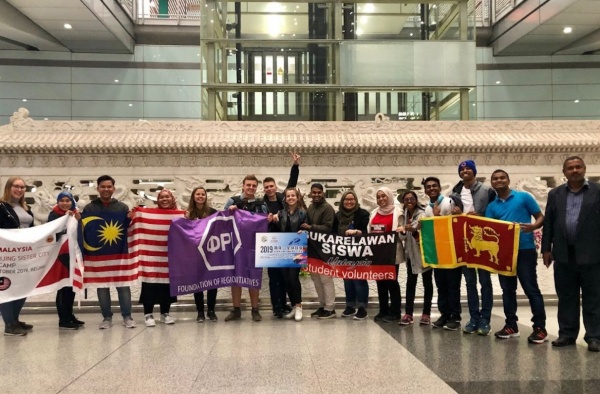 On the topic of the project ‘Youth and international exchange’ were held such forums as international technological, cultural and “green” exchange.

International Department team from The Foundation of Regional Initiatives consisting of Andrii Sidletskyi, Dima Nosov, Alyona Sekret, Anastasia Tertychna, and Valeria Cherniak presented the sector of public organizations. In addition, there were representatives of administrative organizations, media, and entrepreneurs on the project.

“First of all, it is a cool experience of networking. During the 7 days, representatives of NGO FRI were communicating with participants from 45 countries and learned new working methods in organizations, gained knowledge about the experience in work with media, businesses, and institutions in different countries.

Personally, I gained experience of leadership in a team on the projects, interaction with over 150 other participants of a big project.

I am glad that a lot of our new friends from organizations — participants of that project are ready to start a collaboration with the NGO FRI”.

The program of the project was more than just busy. During the week the participants visited The Great Wall of China, The Forbidden City, Tiananmen Street and were in the center of the innovational electro car industry — Beijing Automotive Group Co., Ltd.

“The project amazed by its greatness. To unite the participants and to take care of everyone — this is a sign of an organization of the highest level, not just a usual international project”.

The participants have also prepared reports for an organization ‘Belt and Road’ with ideas and suggestions which can solve development problems. For example, it was suggested by the community organizations sector to conduct international university exchanges of partner organizations and volunteering programs where an organization invites an expert to improve its activity or a volunteer comes to a new organization in order to gain experience and spread it around the members of his organization.

“What has blown the mind? I think, the greatness of the city and its harmony. The quality of organizing the project and discovering the culture of other nationalities”.

A rich program was complemented by the tasks aimed to melt the ice between different sectors’ representatives.

“The greatest experience is from Chinese culture (food, in particular), The Great Wall of China and the people I was socializing with during the project. I got a new portion of motivation for new achievements and projects and discovered something new about worldview. I was also amazed by incredible self-control and hard work of organizers”.

It would seem that a week should be enough to plunge into the culture of the new state and 34 others. However, through an active program, he would only show up for a few hours at night to get some sleep. An understanding of what you are in China has come to everyone only on the third or fourth day.

And this confirms the idea that it is better to sacrifice sleep on a project than with missed emotions.

“There were a lot of interesting highlights during the project — from the “remember the name” and “understandable accents” challenges to writing a conference speech, creating and finalizing presentations in a short time and speaking to large audiences. As a result, the skills of language and public speaking, as well as many new friends from around the world, have been pumped.

What to do with it?

Enjoy. No, create projects at the same (or slightly higher) level (and space was the level), collaborate with organizations with which they have established relationships, and be inspired and motivated by memories: China really did its best to make us feel better!”

It is worth noting that our organization first participated in the Beijing Sister Youth Camp. Thanks to the cohesiveness of the project and the fruitful communication, FRI-members will be able to discover new horizons for China next year. We hope this project will bring us new partnerships, make our work even greater and create a base for new cooperations!