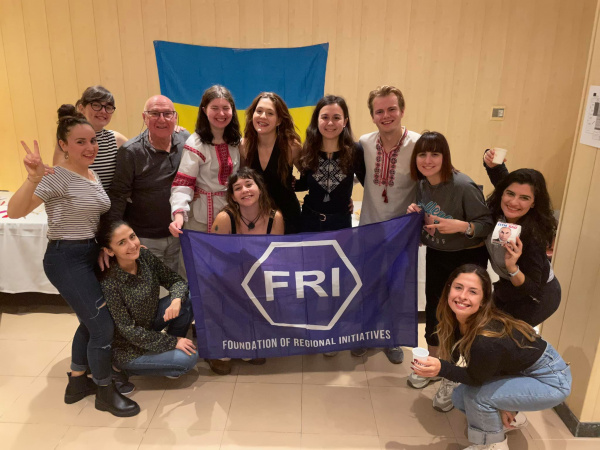 What would you choose?

Sometimes it seems that different exchange programs and volunteering are almost impossible things and cost huge amount of money. Would you like to cast back those stereotypes and change your life radically? I’m pretty sure that yes, and Oleksandra Klesovets (a member of FRI Kyiv and a participant at Erasmus+ in Spain) will definitely help you with it.

— When was the first time you got acquainted with volunteering and its roots?

— What exactly encouraged you to try yourself in such programs like Erasmus+?

I didn’t even know that there are short-term Erasmus+ programs. Once Zhenia Poliakov from FRI Kyiv sent me the telegram channel “Lovy Moment”. There I saw a lot of different opportunities and decided to try. That happened spontaneously. I was saving money for a new phone, but later it turned into buying tickets to Spain.

— Were you scared of flying to the new country alone?

I wasn’t that scared of flying to the new country, I was even a bit anxious. That was my first experience of flying, because I had never been abroad before. When our plane landed in Spain, I was afraid of talking with people, because of my English. It was even difficult to buy something to eat.

— What was your parents’ reaction to your participation in the program?

My mom wasn’t that angry about it and she even supported my decision. She wasn’t trying to discourage me, and when I told her that I had already bought tickets, she was like: “Well, okay”.

— How was the program conducted and what was your role in it?

The program was dedicated to discovering identity of people, identifying ourselves, learning not to “tag” other people and understanding how our identity influences our work. There were a lot of different sessions, reflexions and teambuildings for which we are extremely thankful to the organizers. There also were various interesting exercises aimed at defining major identity moments and listing the most important ones. Everyone was a bit confused at first, but then we got acquainted with each other and started communicating.

— Did you have any problems during the program? What did you like and dislike?

There were barely any issues. I liked everything, especially the connection between all members and reflexions. The program creators were incredibly cool, they always supported the participants and took all requests and remarks into consideration.

— How did you spend your spare time?

Mostly, I was walking around Valencia or Alicante. I came to Spain two days earlier, that is why I was all by myself during the first day there. On the second day I met Anton and Olia who took part in the same program. I remember the day, when there wasn’t any Internet connection, and I just had to walk around the streets to find it somewhere, but still it was so cool.

— Was it difficult for you to communicate with other participants or citizens?

When I just arrived in Spain, I was afraid to say anything in English. Spanish citizens speak very fast, that is why it can be hard to understand them sometimes. Fortunately, during the program communication with the participants went easier so one shouldn’t be worried about their English.

— Do you regret taking part in that program?

No, definitely not. I enjoyed it very much and would like to come back there again. I came back filled with a surge of energy and power, while before that I was mentally exhausted.

— Do you think our modern community should participate in such programs?

Of course, yes! I have always thought that Erasmus+ programs are long-term and are created for students of state-financed education from prestigious universities. However, when Zhenia told me about the Telegram channel “Lovy Moment” I decided to enroll in one of the opportunities. It’s incredible especially for raising awareness, intercultural activites, getting rid of stereotypes and plunging into the new and exciting. That’s why you should definitely try it!

— What pieces of advice would you give to future participants of Erasmus+ programs?

Not to be afraid, but try to find opportunities, write motivational letters and not be upset if you aren’t selected because a bit later somebody will call you and tell that you are the one who gets a happy ticket. That’s why it’s necessary to be patient as well. Don’t be afraid of your English level. It’s also better to ask Erasmus+ participants what to bring for the program.

So don’t give up and you will definitely succeed! Break a leg!