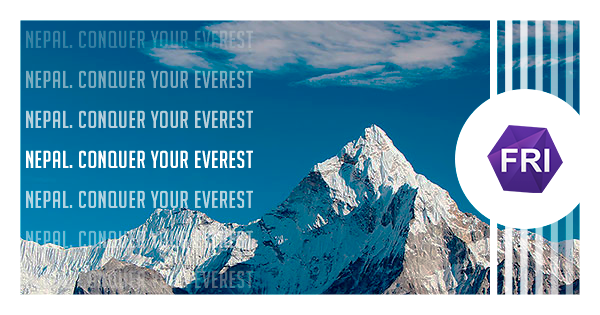 Since the pandemic started, travelling abroad has become almost impossible, and due to the lockdown many people have lost the inspiration and motivation to realize their dreams.
To support young people and to restore their faith in travel, the International Department of Foundation of Regional Initiatives organized a two-day online project: «A sip of Nepal: Conquer your Everest» on May, 27–28. This event took the participants on a virtual journey to a distant country in Asia — Nepal and also told the story of climbing to the highest peak in the world to encourage people to achieve their own goals.

On the first day participants learned about the culture and life in Nepal with the help of its residents Ashit and Prabin from the Nepali organization «YPDSN Nepal».
The speakers talked about cuisine and music, shared their favorite places in Nepal and broke some stereotypes.

One of these was that most Nepali people climb Everest. In fact, you need to be really fit and healthy to do this. Therefore, the highest peak of the world is conquered only by real professionals.

It is mistakenly believed that Jomolungma is the only decoration of Nepal.
However, there are many beautiful cities, such as Kathmandu, Pokhara, Lalitpur and more. Moreover, there are half a dozen mountains that are higher than 8000 meters, so you should visit Nepal not only to climb Everest!

The Nepali speakers emphasized that you should not be afraid to discover new people and other cultures because it is fascinating and expands the horizons! Although the country is small, there are 120 ethnic groups, so diversity is perhaps the best word to characterize this country! And this is what makes Nepali society very friendly and tolerant to other people and cultures.

On the second day the ukrainian climber Roxanne Litynska told her story about climbing Everest. Apart from that, she had planned to climb the highest points of other continents – and she succeeded!

After being asked if she planned to climb Everest again, the speaker said she did not want to but instead wanted to conquer new peaks. The climber motivated the participants to overcome themselves, their fears and expectations, noting:

«The risk is huge everywhere, but if you take it, you will achieve your most ambitious goals. After all, life does not end at one peak; many opportunities still can be taken.»

This project helped to show the participants that sometimes people are obsessed with stereotypes and that is why they form misconceptions about the country. So do not believe only the pics on Instagram, but communicate with foreigners and compatriots who definitely have something to share and will encourage you to conquer all of your own Everests!